We learned last year that my migraine situation was a problem. Well, more of a problem than usual. You can read more about how I did in 2019, but it wasn't great. I continued to log each migraine I had throughout 2020 because I'm a nerd.

I made improvements, but they came in the second half of the year since it takes that long for trial and error to work. That said, I ended the year at 45 migraines (a drop from 67 in 2019). It's still not ideal, but plenty of people have it worse than I do, so I'm lucky in that sense.

The shining light of this year's log is that I now have a working calendar heatmap created with the power of D3. This is great because D3 is more in my wheelhouse than Tableu and I can keep it running for each new year I decide to keep doing this madness.

D3 is fun and exciting and equally complicated, so my chart only goes so far in displaying the data. I only keep track of the day and start time so the chart isn't too overwhelming, but it makes it more maintainable for myself as well.

What Were The Causes?

Look at this graph: 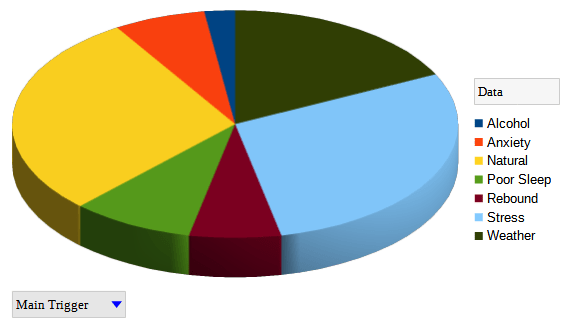 It's very hard to associate what causes a migraine. For one, it isn't always due to a single trigger alone but rather a multitude or building up of triggers over time. Also, it feels too reductive at times - especially when I have no idea what happened and I can only point to natural causes.

It shouldn't be surprising then that the order is as follows:

When Did They Most Happen?

I mentioned earlier that I saw improvements in the later part of the year. October was the only month I went without a single attack (woohoo), but from that point on they've been sparse. This is a result of finding the right routine and medications, but it feels great to not live in a constant state of tension-headache-fear.

Look at this graph now: 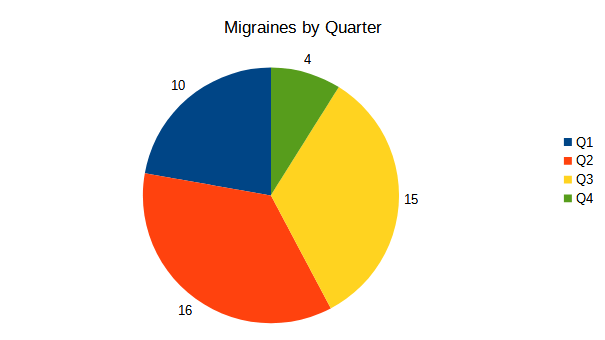 Since I keep track of the time of day they happen, I also know what times of day they most occurred. If that sounds interesting to you, then you'll love this graph:

This one is a little less telling since it's a pretty regular distribution, but I had the most migraines between the hours of noon - 4:00 p.m. The second place slot was tied with midnight - 4:00 a.m. and 8:00 a.m. - noon.

It's not like I was staying up late all the time and that's why I got so many after midnight. The reason for that is I have the unfortunate habit of waking up in the middle of the night with a migraine fully in progress.

I've stopped doing all the logging by hand because it is cumbersome trying to keep track of every little detail myself. There's this cool app called Migraine Buddy that I'm trying now. So far, it's great because it asks all the same questions I was asking myself and then some! I just need to keep track of the dates and times separately for my calendar tracker, but that's a worthwhile trade.

Here's to another year of hopeful progress.